Is a medical procedure to replace or remove the diseased hip joint with artificial joint parts which are often made from metal and plastic components. This method usually opts for the last one when all ways or other treatments have failed in showing any positive response or adequate pain relief. It is done when the pain becomes so severe that it eventually interferes with the normal mobility of the patient as well. 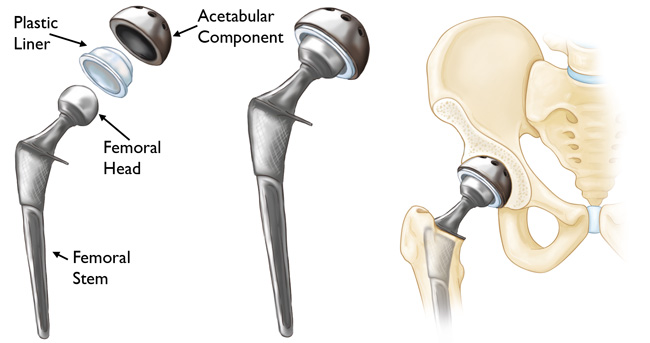 What Happens During Hip Replacement Surgery?

Hip replacement surgery is done in two different ways in which the first one is less invasive than the later one and can be performed traditionally. The size of the incision is the main difference between the two procedures. During hip replacement surgery, the patient will be given a general anaesthesia to put his or her muscles in relax mode so that the operation can be done without much pain or awareness of the procedure. Another anaesthesia option is to give it directly inside the spinal cord which helps to curb the pain as an alternative.

Also Read: What Is A Total Knee Replacement?

After giving anaesthesia, the best hip replacement surgeon will make a cut along the side of the hip and move the muscles aside to expose the diseased area of the hip joint. After the removal of the ball portion, an artificial joint is attached to the thighbone using either cement or another kind of special material which will allow the remaining bone attached to the new joint.

The hip replacement surgeons will recommend you to stay in the hospital for four to six days approximate so that your hips will get maximum support 24X7. You will be laid in a bed of wedge-shaped to keep the new hip joint in place. For normal urinary function, a drainage tube will be placed in your bladder. Physical therapy will be started after a day or depending on the gradual sign of your health. It will include a walker, crutches, or a cane. This takes time and all depends on the immune system of the body.

Activities That Should Be Avoided

1. Avoid stairs maximum and make necessary arrangements nearby to make it possible.
2. Sit straight on a straight-back chair and avoid using recliners.
3. Avoid any slip-able objects from nearby to avoid falls.
4. Use a stool while sitting on a French toilet seat and keep your feet on it because bending should be avoided to provide relax to the hip bones.

With surgeries or any kind of operations comes risk. Surgical methods have been used and excelled by every passing day. The techniques and tools used in hip surgery have also been improved by time but risks are still there. The most common concerns and risks factors are followed that you just can’t ignore after the surgery:
1. The lengths of your legs may vary a little after the surgery.
2. Do not sit by crossing your legs because this will put a lot of pressure on your hip and knee joints and chances of dislocation can be increased.
3. The fatty tissues may get dissolved in the bone marrow and can enter into the bloodstream.

Why would you need to see an orthopedic surgeon?

What are the most common types of Joint replacement surgeries?

When Should I Go For Spinal Stenosis

How To Keep Your Baby Warm During Cheap Holidays To Morocco...

Why do We need Magnesium for Bone Health

All you need to know about dental implants

5 Ways father taught his son how to play baseball

3 Things to Know Before Purchasing from Online Medical Supplies

What Is Spinal Surgery & Why It Is Necessary