Have you been told that the previous step to walking is to use the walker? Well, they’re wrong. We ask you why you should not use them.

Walkers, Yes or NO?

This question is more prevalent than we think. If we are off guard, we may think that putting a baby on a walker can be very stimulating for him because he can access many things that otherwise he could not. With the walker, the baby can move quickly and reach the places that alone could not. This first impression in favor of its use changes radically if as adults we stop to observe what happens when a baby uses it. 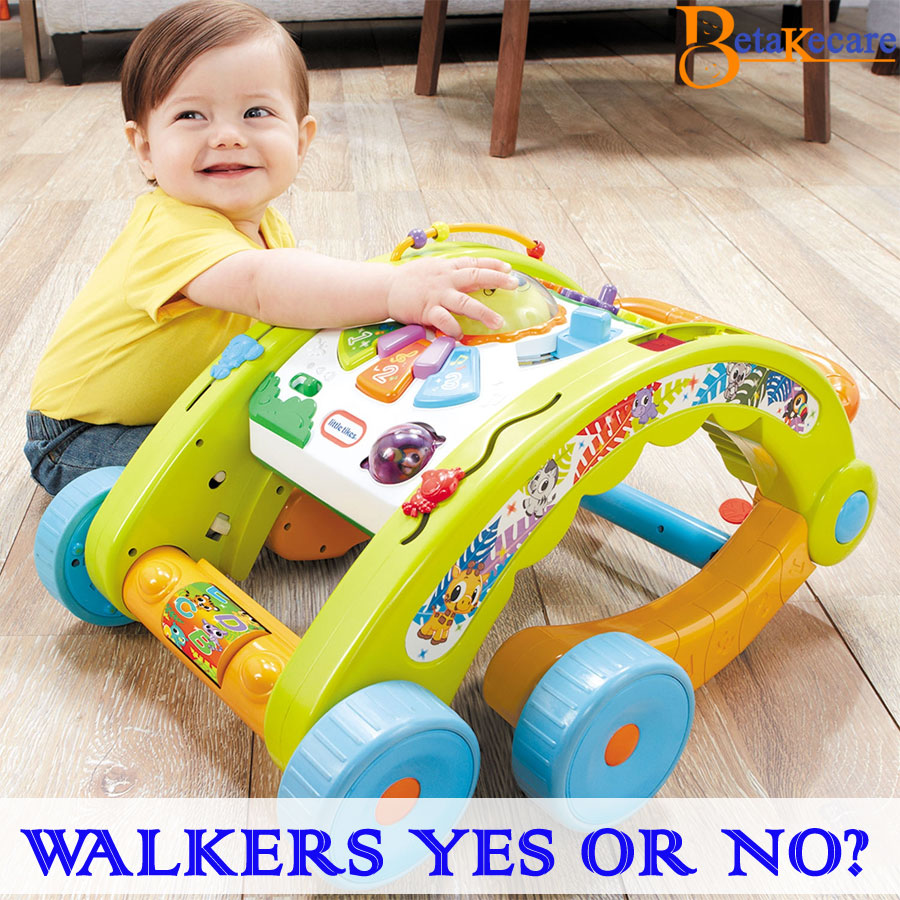 The walker is not an element that stimulates a baby but on the contrary, limits, confuses, blocks the development of his postures, locking his hip, does not allow him to reach the objects he wants, generates a false body image of himself , Causes the baby to support his feet badly since if he does not reach the floor with the entire sole to be able to push himself, he does it with the tip. This, instead of strengthening the muscles of his legs, weakens them and does not allow them to reach a harmonious development of all their members and the worst: it is dangerous for their physical security.
Also Read : A Guide for First Time Parents
But let’s go step by step. Here are five reasons to avoid using the walker.

Why not use baby walkers?

1. Because It Does Not Stimulate The Baby
In fact, it provokes in his interest and the false sense of being able to see and reach objects that before putting him on the walker could not reach. So what happens? Very simple: he is excited, he supports the tip of his feet, he impulses and leaves quickly in search of the desired object. However, something unexpected happens when it comes close to him: the Walker collides with something or cannot take it since he will not be able to bend down and then it will depend on someone to reach it.
Also Read : DOs and DON’Ts of Choosing A Baby Crib Mattress
2. Because It Confuses Him And Makes Him Dependent
If he fails to take one object, he will look for another and try again. But it happens again and again. Therefore, the message he receives is that no matter how hard he tries, he will not be able to take it, and the reality is that in order for an object to be stimulating and to cause the child to learn, he must be able to grasp, suck, squeeze, And take it back, and so many times. But if you continue on the walker this will not happen.
Also Read : Top 5 Apps Which Are Helpful In Early Education of Children
3. Because It Blocks The Development of Your Postures
When a baby is sitting on the walker, his legs are separated, and his hip is fixed. You can not move freely to one side and another. Nor does he need to force himself to stand because he simply lets himself down on the seat. Then you should not strain yourself and do not exercise your muscles. Therefore, when you are out of the walker, you will depend even more on adults because you have not acquired muscular toxicity, strength, and coordination: all aspects necessary for you to be able to own your movements, whether crawling, crawling or stopping and starting to walk.
Also Read : Choosing a Stethoscope to Hear Baby Heartbeat
4. Because It Generates A False Body Image of Itself
When he is in the walker, the limit of his body is the walker, not himself. The baby’s perception of the size of his body is based on the information he receives from the movement of the walker in space and not that of his body and his environment. This perception develops, for example, when it hits a wall or if it can or can not pass through a door, but also when it reaches something with its hand. If the child is on the walker will form an erroneous body image, as it will record body limits that are not their own.
Also Read : First Month Baby Care Tips
5. Because It Is Dangerous For Your Physical Safety
The Walker has caused serious accidents. If the walker turns over the first thing that strikes the floor is the baby’s head. Not to mention the babies that have rolled down stairs with the gravity that this entails. Also, inside the walker are unable to defend themselves with their hands since they cannot be guarded or guarded against any impact.
Please do not expose your child to these dangers! Do not use the walker if you want a baby who unfolds his full potential during his psycho motor development.
Also Read : Some Tips to Help Baby Get Stronger

Expand Your Lunch Menu with The Best Lunch Recipe Apps

The issues that arise with the elderly people

Here’s what you must know about Artificial insemination procedure

Teach your Kids to be Responsible

Preparing Your Home For A Newborn Baby